skip to main | skip to sidebar

I just finished reading this book and loved it. Outstanding plot and ideas. If you love good science fiction set in the modern day, give it spin. 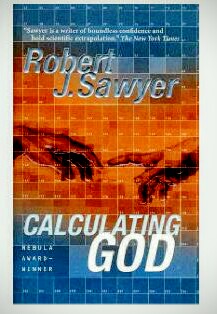 Creationists rarely find sympathy in the ranks of science fiction authors--or fans, for that matter. And while Robert J. Sawyer doesn't exactly make peace with evangelicals on the issue, Calculating God has to be one of the more thoughtful and sympathetic SF portrayals you'll find of religion and intelligent design. But that should come as no surprise from this crafty Canadian: in the Nebula Award-winning Terminal Experiment, Sawyer speculated on what would happen if hard evidence were ever found for the human soul; in Calculating God, he turns science on its head again when earth is invaded by theists from outer space. The book starts out like the setup for some punny science fiction joke: An alien walks into a museum and asks if he can see a paleontologist. But the arachnid ET hasn't come aboard a rowboat with the Pope and Stephen Hawking (although His Holiness does request an audience later). Landing at the Royal Ontario Museum in Toronto, the spacefarer (named Hollus) asks to compare notes on mass extinctions with resident dino-scientist Thomas Jericho. A shocked Jericho finds that not only does life exist on other planets, but that every civilization in the galaxy has experienced extinction events at precisely the same time. Armed with that disconcerting information (and a little help from a grand unifying theory), the alien informs Jericho, almost dismissively, that "the primary goal of modern science is to discover why God has behaved as he has and to determine his methods."
Inventive, fast-paced, and alternately funny and touching, Calculating God sneaks in a well-researched survey of evolution science, exobiology, and philosophy amidst the banter between Hollus and Jericho. But the book also proves to be very moving and character-driven SF, as Jericho--in the face of Hollus's convincing arguments--grapples with his own bitter reasons for not believing in God. --Paul Hughes --This text refers to an out of print or unavailable edition of this title.

Sawyer (Flashforward; Factoring Humanity), a Canadian, is one of contemporary SF's most consistent performers. His new novel concerns the appearance at the Royal Ontario Museum in Toronto of a spiderlike alien paleontologist named Hollus. The alien has come to Earth to study the five great extinction events that have hit our planet over the eons, the best known being the asteroid collision that wiped out the dinosaurs. When the museum's head paleontologist, Tom Jericho, consults with the alien, he is shocked to discover that Hollus has proof that her own planet and that of another alien race suffered a similar series of five catastrophic events at virtually the same times as Earth did. More surprising still to a 21st-century disciple of Darwin like Jericho, both alien races see this synchronicity, along with other scientific evidence, as proof of the existence of God. Much of the novel is relatively cerebral, as Jericho and Hollus argue over the scientific data they've gathered in support of God's existence, but Sawyer excels at developing both protagonists into full-fledged characters, and he adds tension to his story in several ways: Jericho has terminal cancer, which gives him a personal stake in discovering the truth of the alien's claims, and lurking in the background are a murderous pair of abortion clinic bombers who have decided that the museum's Burgess Shale exhibition is an abomination that must be destroyed. Finally, there's the spectacular, if not entirely prepared for, climax in which God manifests in an unexpected manner. This is unusually thoughtful SF. (June) FYI: Sawyer's The Terminal Experiment won the 1995 Nebula Award for Best Novel.
Copyright 2000 Reed Business Information, Inc. --This text refers to an out of print or unavailable edition of this title.

Diagnosed with lung cancer, paleontologist Thomas Jericho expects to die within the year. What he doesn't expect is the appearance of a spiderlike alien in his museum seeking confirmation from Earth's prehistoric past of the existence of God. The author of Factoring Humanity once again demonstrates his wild talent for innovative, iconoclastic storytelling as he relates a thought-provoking, sobering, yet wryly compassionate tale of one man's discovery of timelessness even as his own time is running out. A good choice for most sf collections.
Copyright 2000 Reed Business Information, Inc. --This text refers to an out of print or unavailable edition of this title.

“An enthralling story…. [The] climax [is] an exhilarating and touching glimpse of transcendence.”
--Starlog
“Vigorous speculation…Sawyer ends with some grandeur worthy of vintage Arthur C. Clarke.”
--The Denver Post
“Sawyer is first and foremost a writer of ideas, some concept that can drive a narrative through to a grand conclusion, one that remains true to science but often achieves that sense of transcendence that Samuel R. Delany once said was the sine qua non of science fiction. This is Sawyer’s great strength, and it’s fully present in Calculating God….A intellectual thriller with real bite.”
--The Edmonton Journal

Here is another image from the theatre distric in Boston. I also like the street feel of this setting. 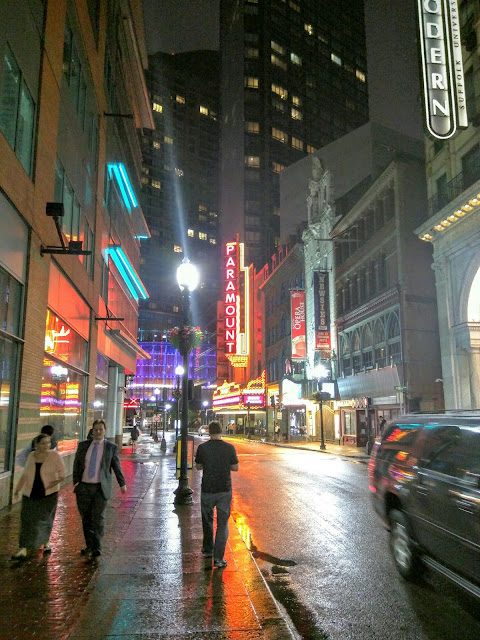 Posted by Unknown at 5:31 PM No comments:

I took this photograph while in Boston in June 2015. I really like it. It was a spur of the moment shot. Turned out nice. 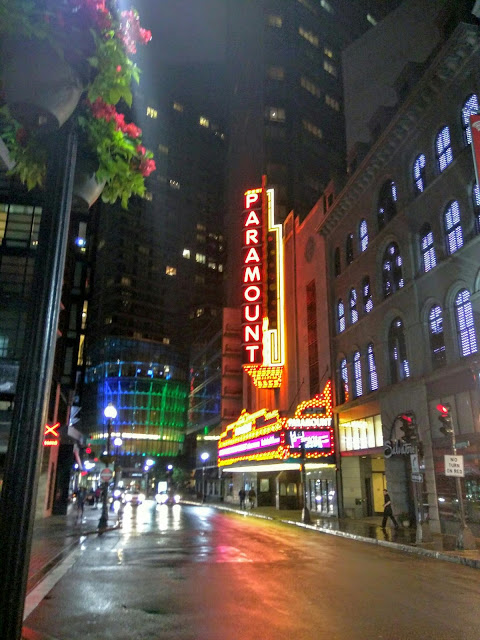 Posted by Unknown at 5:27 PM No comments:

I'm not a big fan of reading books on my mobile phone. I like my Kindle or Tablet for this. And when I do read ebooks I'll use the Kindle app. I don't feel like stacking up libraries in different applications so I will stick will Amazon and my Kindle.
Posted by Unknown at 8:24 PM No comments:

The elm4you.org website turned out to be a pleasant surprise for me. I can see it being a useful tool when I am on the go. I made sure to bookmark it and sync my bookmarks on my other devices.
Posted by Unknown at 8:12 PM No comments:

I'm not one that shares many photos. When I do I will post them on facebook. But I did give Instagram a try. I just can't think of too many reasons right now why I would use Instagram over Facebook if I want to share my photos.
Posted by Unknown at 8:07 PM No comments:

The Aviary app caught my attention so I gave it a go. I like it. When it comes to taking photos I like to capture what I see and not do to much editing. Aviary has some basic tools that I can be helpful if the mood is right. Overall I am satisfied with the basic camera of my phone and what it can do.

Posted by Unknown at 8:02 PM No comments:

I've been using the major social network tools (linkedin, facebook, foursquare Google+ and twitter) so I decided to look at how Hootsuite can integrate all three of these tools together. I'm having trouble getting Hootsuite to work with Foursquare and Google+. Google+ seems to be a coding issue and Foursquare integration requires a subscription payment to integrate into Hootsuite.

Posted by Unknown at 6:05 PM No comments:

I've given Pintrest a go.  But I gotta say it is not my cup of tea. I prefer using Evernote and the bookmark sync functions of my favorite browsers. I need to spend more time with Pintrest ti really figure out how it will fit into my life. For now I will enjoy browsing the images.

Posted by Unknown at 5:27 PM No comments:

I've been using Quick Office for a while. It suits my needs quite well. I tried CloudOn as well. Both have there place in productivity apps and I might use both both if I need to. But I'm not a big fan of using mobile phone to create large documents. I prefer my laptop for this.
Posted by Unknown at 4:51 PM No comments:

Spring pad is shutting down so I did not get a chance to use it. Bamboo paper is not available for my devices for some reason and I really don't like remember the milk. I've tried remember the milk when it first came out and was not impressed. I've simply fallen into the habit of using Google Keep, Evernote and pen and paper for taking notes. I will often take pictures of my notes and store them on my phone in Google Keep for ease of finding them.

Posted by Unknown at 4:43 PM No comments:

At first glance I was apprehensive about trying flipboard. But ... once I installed it, created an account, and started selecting content areas, my mind changed. I like it. I started collecting technology related clippings.
Posted by Unknown at 5:58 AM No comments:

I gave the wi-fi finder app a try. Looks like this is a keeper!
It nailed all of the spots near me and identified areas I was unware of having free wi-fi.

Here is a screen shot of how it looks in the area near me. 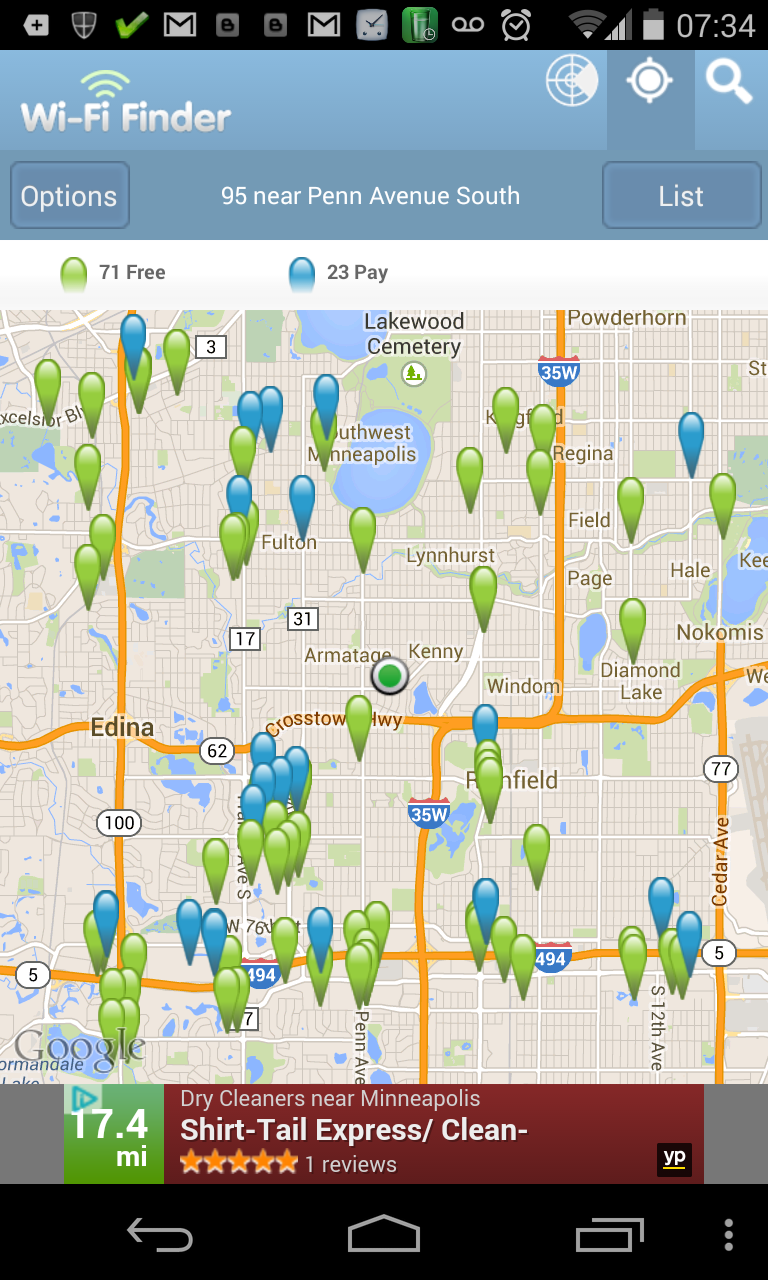 What I discovered for my Nexus 4 and 7 devices

I just love my Nexus 4. It was good decision and I never had a case of buyers remorse with that decision. One of things I noticed is I use it more for tasks and actions versus as a phone. I suspect this is the case for many smart phone users.

I took a look at the 25 google nexus 4 tips one the Item 2 page. Here I took advantage of the pattern security tip. I also took adjusted my font setting by increasing the default font size. I never paid attention to this setting before. It sure makes a difference. At age 43, I now employ reading glasses, but being able to optimize the font size helps relieve eye strain when using my Nexus 4. I also discovered the Nexus 4 user manual and added that to my phone as an app from the Google Play Store.

I picked up my Nexus 7 at Microcenter in September of 2013. It was only sale as an opened box special for $149. It is a 1st generation model and it does run a little slow at times. But I do like it and am glad I made the purchase. It has been a great aid when I need to read digital items for class.

I read through the Nexus 7: 30- Tips and Tricks and 40 Google Nexus 7 Tablet Tips and Tricks sections and also took advantage of the pattern security function and font adjustment tips. I also added the Nexus 7 user manual to my apps section. It is available in the Google Play Store. Other than that, I did not learn much more from these sections.
Posted by Unknown at 7:02 PM No comments:

I chose to use Google Blogger because it seems like a simple application to use. Going with blogger eliminates the need for me to set up a hosting service and install additional software. I might consider WordPress in the future if my blogging needs require more advanced services. For now I will focus on learning Blogger. Item 1 was an easy task to complete.
Posted by Unknown at 1:13 PM 2 comments:

Hi. My name is Eddy. I am one of the Coaches for the 23 Mobile Things MN project. I am looking forward to answering your questions and providing support as you work through the 23 Mobile Things!
See 23mobilethingsmn.org for more information and to get involved in the project.
Posted by Unknown at 3:04 PM No comments:

[BOOKS NOT BLOGS] Suggested Readings: an eclectic mix of what excites me